Here are some photos from a random day in June. The weather has been wet and dull for a week or so, but today dawned bright and sunny and the temperatures hit the high 20s.

I took the photos around the back garden. Random photos of whatever caught my eye. I should have taken some of the rhododendrons — they are bursting with colour at the moment. But I didn’t. I hung out with the bugs and beetles. Maybe tomorrow.

A beautiful iridescent green, these beetles will emit a foul odour or bite if handled. I need to warn Milo. They are so beautiful — especially when the sun is glinting off them. Thankfully, these guys don’t seem to be a pest at all.

Now, these creatures are the bane of my life. There is a continuous supply of them on my lillies. No matter how many I squash, there are always more the next day. There are no natural predators in North America so they have spread rapidly since the 1940s. It’s a shame they are such a menace, because they are quite beautiful. 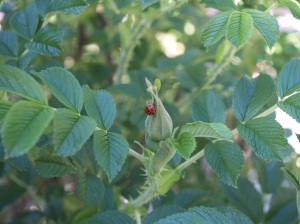 Nothing unusual about this, but I took a photo anyway. She was hanging out on a rose bush. By the way, since ladybirds aren’t true “bugs” they shouldn’t really be called “ladybugs” but rather “ladybeetles”. I’m going to stick with the British “ladybirds” for now. 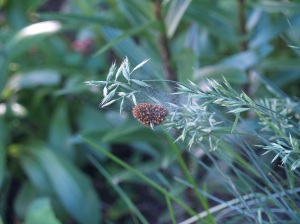 Found this little nest of baby spiders today. I liked its precarious location on a strand of grass, and its neatness.