This month, we watched an American robin build a mud and grass nest, incubate her eggs, feed her young, then leave them to get on with the rest of their lives. The whole maternity leave took a remarkably short time.

We watched her build her nest on a soaking wet day — May 31 — in the rafters of our back deck (about 2 m from the door we use to come in and out of the house). It took her less than two hours to build the nest. She laid her three blue eggs in it within a day or two (my first photo of her sitting on the nest is from June 3). She sat on the eggs more or less all day for the next 17 days, with numerous short trips away either to feed on worms or get away from the noisy human kids that frequent the deck.

On June 18, three baby chicks hatched out: eyes closed and featherless. Quite strange looking actually — definitely not what anyone would consider cute and cuddly. By day three their eyes had opened and they kept their beaks constantly open awaiting worms from mum. She sat on the nest at times, presumably keeping the chicks warm. 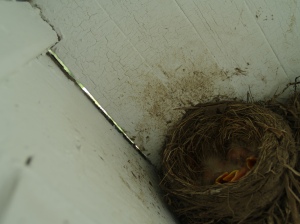 By June 27 (9 days old) mother had gone. She no longer fed them, no longer checked in to see how they were doing. And the chicks no longer sat in the nest with their beaks open. They knew that she wasn’t coming back. They seemed to be busy growing feathers. 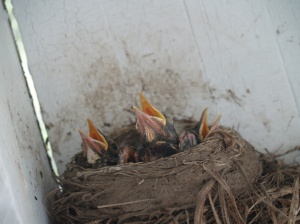 6 days old and their beaks are always open

The day before they left

I did, however, get to see one of them out in the big wide world later today which is almost as good. At around 6.30 p.m. approximately 10 metres from the nest, one of the (now teenage) chicks was perched on the bird bath. I managed to get fairly close to take some photos. I hope it finds a higher perch for the night or the raccoons will make a meal of it.

Out in the world at the tender age of 11 days

I’m hoping mother robin will choose the same spot next year. It was an interesting month watching her raise her children.

Postscript: Mama robin is back on her nest as of August 2. She must have laid some more eggs. I’ll try and get a photo of the eggs this time, once I am sure she has finished laying them. Apparently four is the preferred clutch size and they lay one a day around mid-morning. There is some fascinating info on this American Robin website.