What a winter! According to our neighbour Rod who has spent the last two days clearing ice off our roof, 1962 was the last time Mahone Bayers were up on roofs shovelling snow. This has been the biggest snow year in more than 50 years! The snow started January 13 and has fallen on and off ever since. We’ve had a little bit of melting since spring officially started, but it is snowing again today (March 28) and we still have to back all the way down our driveway if there are more than two cars parked at the top. Even the kids are sick of the sight of snow! We haven’t been able to walk through the woods to school since early February. The drifts in the back yard completely cover the boat and would be waist high on a grown-up.

Home on a sunny day in mid-March

By March break, we had drifts of 5 to 6 feet of snow around the house, but just when we thought it might be over we had a huge dump of 74 cm on the morning of Milo’s birthday (March 18). Biggest dump of the year. Took 30 hours before we were ploughed. And today an expected 15 cm more snow fell. So. Much. Snow.

While there is little sign of spring on the ground, the birds are back chirping loudly on warmer days (they revert to silence when it starts to snow again). We heard our first cardinal around February 19 and flocks of Bohemian waxwings have been eating the old cherries in the front garden. Yesterday, Milo and I spotted a big beaver on the banks of Westhaver Lake and two seals sunning themselves on the frozen La Have River. Clearly the animals think it is time spring made an appearance. 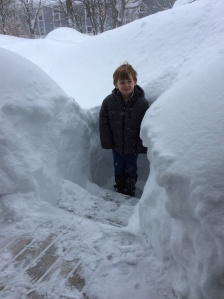 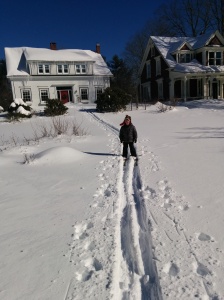 Milo on his birthday (top, March 18) and skiing in the front garden