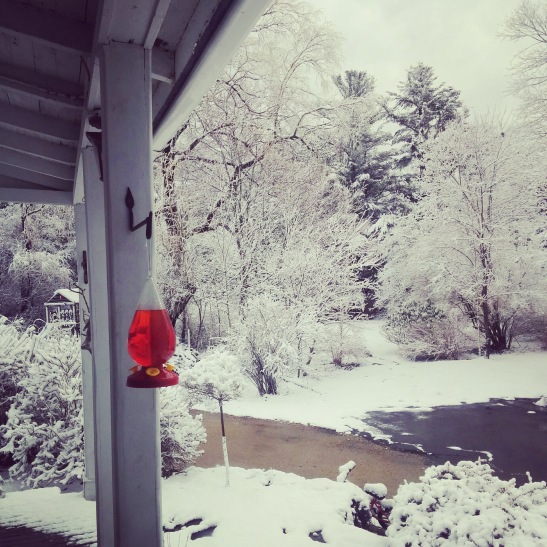 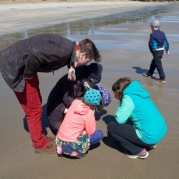 (The shelter-making was April 8 and the snow April 9!)

Friday 29 April – I was in Moncton with the girls and Matt and Milo were biking on the trail to Lunenburg when they found a garter snake, around a metre long. Milo reached out and touched its body and in slow motion it turned its head around then quick as lightening bit him on the finger. Milo fell backwards and banged his head. Quite the adventure! (Matt managed to snap a photo.)

Last week (early May) we were counting the beautiful yellow goldfinches on the feeder (15 was the max count) when Evie spotted something brown and furry peeking out from under the blue shed. It slowly made its way across the lawn to the seeds under the feeder. The long tail was a giveaway – a rat! A sweet, furry, brown rat, but a rat all the same.

The same week we found a dead bird at the bottom of the hill in the woods. Perfect in every way — no idea why he died. We identified it as a Merlin and already have requests from a local artist for the skull, and the feathers are wanted by the kids. We are letting nature takes its course.

Saturday 14 May – We walked to a friend’s house last night around 4pm. It was a glorious sunny, humid afternoon and we went via the ponds. The kids counted the turtles sunbathing on the banks when Milo saw an extra one. Not as shiny as the others and much larger. It was a snapping turtle with a jagged shell and a longish triangular tail. We kept our distance. It’s the first adult snapping turtle I’ve seen in the wild.

14 May – first bug bites of the year 😦 They have been out at Erin’s house for a week or two and the kids have been bothered a little at home in the last few days. But yesterday we were at a BBQ at Dave and Hailey’s and were bitten several times. The spring honeymoon period is over. It won’t be long now until the June bugs hatch. 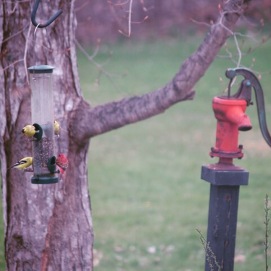 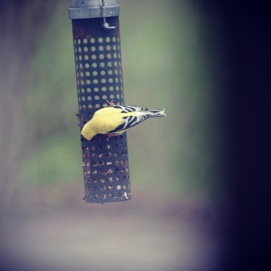