We’ve had a super weird winter this year. We’ve weathered several storms bad enough to lose power. We were in the dark for 5 or 6 hours on Christmas Day evening but can’t argue with the timing — the power went out just as we lit the Christmas pudding at the end of dinner. But we’ve had very little “winter” and precious little snow on the South Shore. Matt has not shoveled once. Evie and I went snowshoeing with Sweetride Cycling just twice with marginal snow both times and even some freezing drizzle.

In Jubilee Woods, January 18, after the biggest dump of snow we had all winter: 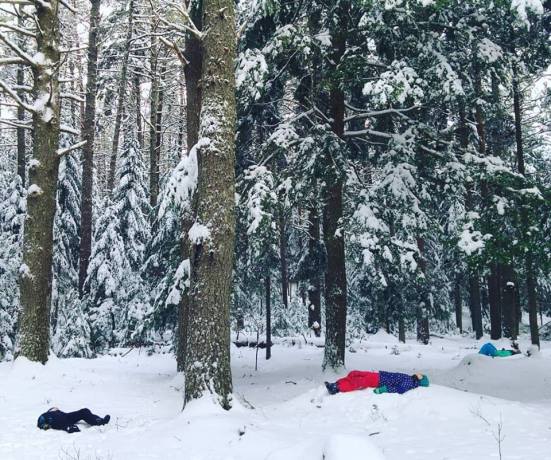 In this post from the CBC, we’re reminded that “year-to-year variability in snow and temperatures is not uncommon for Nova Scotia for the month of February. While this year was mild and relatively snow-free, both February 2015 and 2017 featured colder temperatures and much more snowfall. In fact, both of those years are solidly in the top 10 snowiest Februaries on record for most of Nova Scotia.”

March 3, at Miller Point Park just before we disturbed a big beaver from a hole in the bank:

I haven’t been counting snow days, but we’ve had hardly any. I’m writing this on March 22 which was a scheduled (marking) day off school but it’s snowing/freezing raining so there will be a snow day in lieu tomorrow. My guess is this is snow day number three. Still, everyone is ready for this windy, occasional cold-snappy, non-winter to be over and for spring to arrive.

Not least so I can take the hideous sacking off the rhododendrons. I had them wrapped up in the late fall to prevent further deer damage over the winter, but we haven’t seen much of the deer. Of course. The guinea pigs are also itching to get back outside and munch on the grass. At least, that’s how I’m interpreting all their squawking.